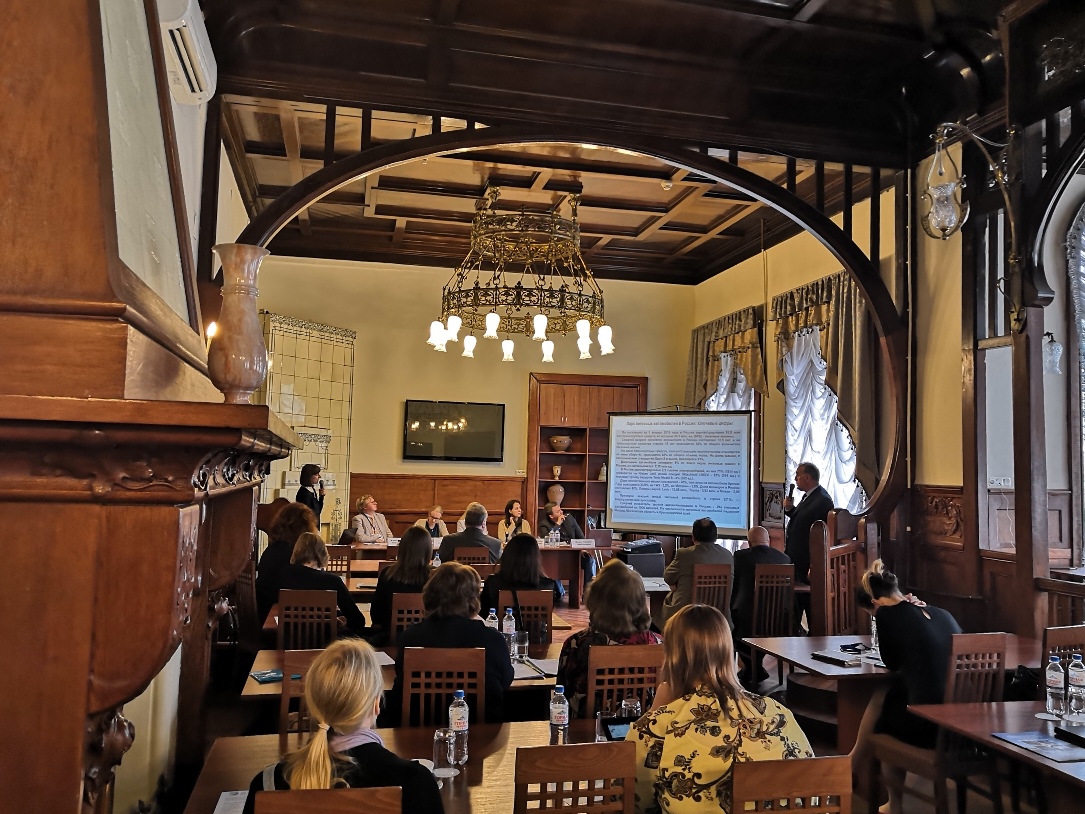 On May 23,  Seminar "Environmental and transport safety: common green approach" was held. The event, which brought together Russian and Finnish partners of the project, representatives of authorities, transport business, tourism and environmental organizations, was held at the St. Petersburg Chamber of Commerce and Industry.

The participants were welcomed by Ludmila Karelina, Project Manager, Vice-President of the SPbCCI, Ekaterina Kuznetsova, project expert of the South-Eastern Finland-Russia Cross-Border Cooperation Program, and Emmi Laukkanen, the head of the air and energy quality group of the Finnish Meteorological Institute (FMI),  Alexander Grigoriev, the head of the Department of state regulation in the field of environmental protection of the Committee on environmental management, environmental protection and environmental safety and Felix Goncharov, General Director of Global BUS Ltd., Chairman of the Committee on transport and logistics of SPbCCI.

Ludmila Karelina informed about the formation of the project target group, which consist of Russian companies and, in the future, a relevant Finnish companies. Ekaterina Kuznetsova noted that the Green InterTraffic project is very balanced in scientific, practical and educational aspects. It is expected to contribute to the development of environmental and transport safety, and the program management is looking forward to its results.

The participants of the Seminar heard the speakers devoted to the work done in six months and the upcoming tasks.

Alexey Vorontsov, General Director of Transport Integration Ltd., informed that in Russia the transport industry accounts for about 11% of the total greenhouse gas emissions, of which road transport accounts for 76.7%, which is 219.2 million tons of CO2-EQ. The average age of the truck fleet in Russia is 19.7 years. The share of the vehicle fleet over 15 years – 66%.

The speaker compared Russian and Finnish approaches and methodology to the calculation of greenhouse gas emissions and other air emmissions from cars using different types of fuel and energy. Among the main users of the methodology for determining the volume of emissions, he pointed out the executive authorities and subordinate organizations, scientific organizations, organizations that operate vehicles and roads.

According to him, the concept of monitoring in St. Petersburg is discussed "actively, difficult and widely". He drew attention to the problem of discharge of surface runoff from highways, in particular, from the considered road, as the experience of operation of a number of urban highways shows that local wastewater treatment plants are not sufficiently cleaned.

Emmi Laukkanen presented a report on "Dispersed modelling of air quality and emissions from road traffic", covering aspects such as the collection of data in Finland, emission calculations, air quality monitoring. "We plan to install AQT sensors along the E-18 road. The obtained data will be published on our website; we will compare them with the results of modeling. But do not exaggerate the role of sensors," commented Emmi Laukkanen.

Felix Goncharov highlighted such aspect of increasing environmental friendliness of transportation as the use of liquefied natural gas, and touched upon the problem of insufficiency of infrastructure for LNG use in Russia. In St. Petersburg, compressed gas goes in the order of 188 buses and 100-150 cars and utilities. "The lack of infrastructure and connection to the main gas pipeline does not allow to develop powerfully in this direction and to replace it with gas equipment," he added.

Yuri Popov, Director of the Department of the Transport Integration Ltd., spoke about the existing services of the intelligent transport system on the E-18 road and the tasks for its development. He listed the main steps on the way to the creation of a full-format ITS of the a-181 "Scandinavia" road: definition of users and participants, composition and purpose of subsystems and services, determination of the order of provision of services and composition of activities, as well as the development of a Program for the creation of a full-format ITS.

Dr. Olli-Pekka Hilmola, Professor Lappeenranta Technological University, and Oskari Lahdeaho, Junior research assistant at LUT, spoke on the topic of estimating emissions of vehicles using the standards of Finland and in the EU. According to Dr. Olli-Pekka Hilmola if you count emissions using Finnish coefficients, the values for Finland will be less than if you use English coefficients, for example. The Professor also analyzed the pros and cons of LNG, saying that its use makes sense only in normal operation of the engine. Otherwise, there is such a thing as "methane slip", and emissions increase.

Mark Vinogradov, a researcher of the Institute of Radar Meteorology, analyzed the impact of weather factors on the volume of greenhouse gas emissions and other harmful substances from road transport and their dispersion in the atmosphere. Regarding the practical results, he stressed that within the framework of Green InterTraffic in terms of meteorological support, it will be implemented to obtain operational data from automatic road meteorological stations (ARMS) installed along the E-18 road, and the calculation of a specialized forecast of winter slipperiness in the operational mode.

Victor Frolkis, Professor of the St. Petersburg state University, highlighted the results of lidar measurements and methods of their processing. A mobile lidar system was introduced, which was used to measure at three selected points. Among the features of the pollution from the cars, he called the high growth in the number of vehicles, toxicity of emissions, the low height of release of harmful substances (0,5-0,7 m from the surface of the earth). In addition to air, soil and groundwater pollution, the last of which has been eliminated for centuries, toxic emissions pose a great danger to human health.

During the event, the participants asked the speakers questions and discussed with the project management the prospects for further participation in the target group.